Physically Based Shader development in Unity and WebGL,
and Graphics Programming in Rust.

Recently took another stab at getting a good Rust development environment going on Windows, and this time it went great!

The ecosystem is maturing fast. Compared to last year, multirust has an excellent successor, rustup, which works pretty much everywhere.

Also the language server project is shaping up well, and has enough functionality to cover most IDE functions.

This is what you'll get by following these instructions: 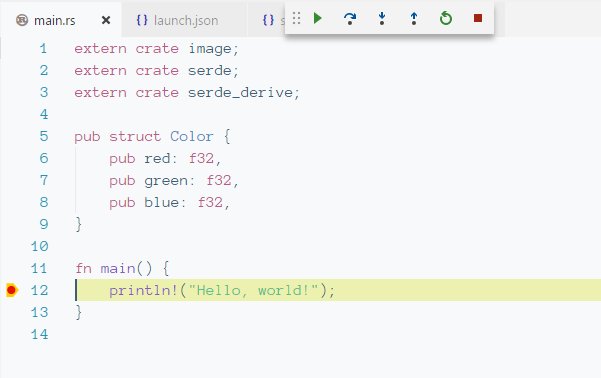 So let's get started, from a clean Rust install, to debugging on Windows 10.

or if you want to be more precise, it'll look something like this:

You specific target and toolchain may vary depending on your machine.

You can have both gnu and msvc version around and switch them with rustup. For more on that, look at the rustup docs.

To update your rustup toolchains automatically:

There are many tools that makes development with Rust easier, you can install them with cargo:

It's up to you which ones you want to install, but the ones that have been most useful for me so far are rustfmt and racer, though racer is getting superseded by the Rust Language Server, which we will setup momentarily.

Now we're ready to go on with installing and setting up Visual Studio Code. You might prefer another editor/IDE, but VSCode is being used as the testbed for the RLS functionality, so I'm sticking with it, as it's most likely to work.

Assuming you don't have VSCode already, here are the steps to install it from scratch:

or wherever your rustfmt executable ended up being.

Now you should be able to compile, run, get autocompletion, and error lists in VSCode, and more.

You can have debugging as well.

VSCode has also got an extensive list of optional themes, be sure to check them out by doing File -> Preferences -> Color Theme-> Install Additional Color Themes.... The one I use is Harmonic16 Light theme.

I use Anonymous Pro as a font for all my code editing. If you similarly have a favourite font, you can set it up and change the size, by adding these lines your settings:

This is all, happy coding!

Comments? Give me a shout at @shadercat.
To get the latest post updates subscribe to the ShaderCat newsletter.
You can support my writing on ShaderCat's Patreon.